Roy Moore May Have Not Won, but he needs to continue his crusade about voter fraud 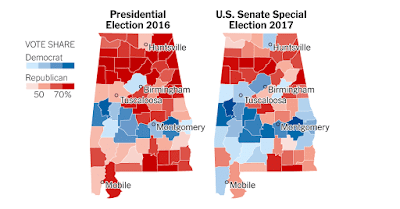 We know that the Democrats lie, cheat, and do everything they can to hang on to their power.  A Democrat women’s rights lawyer offered money from donors to pay women to come forward with sexual misconduct allegations against Donald Trump during the 2016 election. California lawyer Lisa Bloom offered to sell their stories to the media while taking a nice commission for herself. She even offered to pay off an accuser's mortgage, and to pay another woman $750,000 to come forward.

Congressman Matt Gaetz has alleged that the FBI had extreme bias in favor of Hillary Clinton in 2016, which not only kept her out of prison, but nearly won the election for her - in short, not only was the Democrats lying about her corruption ... so was the FBI.

Rosie O'Donnell offered a bribe of two million dollars each to two Republican senators if they voted no on the GOP tax bill.  Bribery charges are unlikely, though I am willing to guess criminal charges would be on the table if the celebrity in question was conservative.

Senator Al Franken won his seat in 2008 narrowly after illegal votes by over a thousand felons and votes found in a poll worker's car trunk were counted and added to Franken's final tally.


In California, the State has been sued by the Election Integrity Project and Judicial Watch.  The latter has reported that at least 3.5 million more people are on U.S. election rolls than are eligible to vote.

California’s San Diego County has 138% registration over the number of eligible voters in the county.  Los Angeles County’s 144% reveals that California may not truly be as blue as the fraud has convinced everyone of.  There are 1,736,556 voters on the rolls above the number of those eligible to vote, in the State that now embraces illegal aliens and calls itself a Sanctuary State.

Ghost voters (those who are registered, but not eligible to vote) are a significant segment of the list of voters: Colorado: 159,373 Florida: 100,782 Iowa: 31,077 Michigan: 225,235 New Hampshire: 8,211 North Carolina: 189,721 Virginia: 89,979 (For a deeper dive into these data, please download my spreadsheet here.) President Donald J. Trump’s supporters might be intrigued to learn that Hillary Clinton’s margins of victory in Colorado (136,386) and New Hampshire (2,736) were lower than the numbers of ghost voters in those states. Clinton’s fans should know that Trump won Michigan (10,704) and North Carolina (173,315) by fewer ballots than ghost voters in those states.

So, is it possible that Roy Moore lost the special election in Alabama to Doug Jones due to voter fraud?  It's very possible.

Fraud evidence has been examined. Numerous reports are showing discrepancies and “coincidences” that compromise the integrity of the vote.  Activists took to “Reddit” to ask African-Americans in Georgia, Mississippi, and Tennessee to travel to Alabama to vote.

A video emerged of one voter admitting to the fraud:

Democrats are known to use dishonest and corrupt means to get votes.  Project Veritas has video of Democrat officials admitting that they bus people around from location to location to ensure multiple votes or at least voters from out of state are counted in elections.

In Alabama there have been multiple claims of buses unloading voters to the polls.  Statistics also provide circumstantial evidence of fraud, showing a turn-out for Democrats in the race with a 92% turn-out. Only around 50% of Republicans showed up to vote.


There has been a bounty of evidence showing that Obama won his elections using fraudulent means as well, but the establishment, and the media, won't talk about it.  Donna Brazile's book was all about how the Democrats rigged the Democrat Primary Election for Hillary Clinton, but that too is being pushed aside as a non-issue by the Democrats, and the media.

With all of the evidence, and considering how close the race in Alabama was, Roy Moore refused to concede, and filed a lawsuit against the State to root out the election fraud.  Moore's election complaint alleging potential voter fraud in Alabama's special election urged a delay in certifying the results.

An Alabama Circuit Judge Johnny Hardwick denied Moore's attempt to halt the certification of the results from the special election held on December 12 for the vacant Senate seat in Alabama.  Judge Hardwick is a registered Democrat.  From a constitutional point of view, according to Article I of the U.S. Constitution, the decision is not the court's.  "The Times, Places and Manner of holding Elections for Senators and Representatives, shall be prescribed in each State by the Legislature thereof."

While I agree with Moore, and I am as sure as he is that Democrat Doug Jones' win in such a dark red State could only have happened with voter fraud (and the right injection of bogus sexual harassment charges) this is a fight he will probably not be able to win.