Can Trump Do Anything About Rogue State Governors?

A reader of Political Pistachio, and listener of Constitution Radio, sent an email about his frustrations regarding State officials who are acting unconstitutionally - specifically California, and the State's Sanctuary State Status policy.

Sent: Tuesday, December 26, 2017 9:15am
To: "douglasvgibbs"
Subject: What can the federal government do here?
Doug

Thanks for the answer on this in advance.

Blessings to you and yours 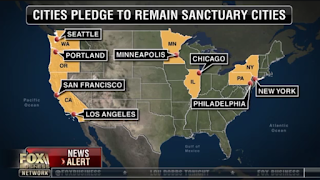 Robert's frustration is that the State of California, as a Sanctuary State, is acting in defiance of the Supremacy Clause (In Article VI. of the U.S. Constitution), which disallows States from having laws contrary to constitutional U.S. laws.