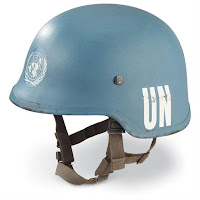 Hiss appointed the members of the U.S. delegation to the U.N., and at the infamous Yalta Conference in the Soviet Union, in February, 1945, stood silently as central Europe was sliced and diced and placed upon the plate of the Soviet Union.

Later in history, Alger Hiss was exposed as a Soviet spy.  He was convicted of perjury and imprisoned for lying under oath about his Communist activities.

At that moment, realizing the communist foundation of the United Nations, and how it was actually a tool for the communists to edge towards global dominance, the U.S. should have pulled out of the organization, taking its military might and money with her.

The communists knew that the United States was their primary obstacle, so the infiltration continued.  After Hiss we experienced the rise of John Foster Dulles, the Marxist revolutionary who was Eisenhower's Secretary of State.  At the United Nations he proclaimed that the goal was global lawmaking, a global judicial system, and a global police force.

The intent of the communists through the harmless-looking shadow of international cooperation was clear, but we remained a part of the diabolical organization.

In September of 1961 the State Department released Publication 7277, "Freedom From War," which established a U.S. policy under the Kennedy Administration that practically hands our System of Liberty over to the communists.  "The disbanding of all national armed forces and the prohibition of their reestablishment in any form whatsoever other than those required to preserve internal order. . ."

Once disarmed, invasion will be easier.

Conservatives, libertarians, and other informed Americans have been fearfully expecting the blue helmets of the United Nations to invade our streets, and force America into the globalist world government community.  The Democrats have actually asked for such a thing.  Under Obama, the census became a preparation for such a thing when they began hitting doorways with GPS markers.  Recently, a Chicago Democrat has called for the United Nations to march on Chicago to help with the fact that the city is a war zone, after generations under Democrat Party control.

The goal is to leave the United States completely defenseless, with no military, and no ability to stop the onward march of communism.  Then, the goal is to dictate the communist will over American Society as the final remnants of our society under the United States Constitution rises into the air as a burning ash, to be forgotten, and replaced by a collective society guided by elite political rulers.

As in all communist takeovers, all dissidents will be eliminated.  Defenders of the United States Constitution would be hunted down and imprisoned, or exterminated.  The United Nations would become the only super power, invincible, as the shining light on the hill is extinguished.

A report in 2012 by the United Nations Office of the High Commissioner on Human Rights established to review forced disappearances in Communist Cuba proclaimed “The rights to life, liberty and security of person have always been mainstays of the Cuban Revolution, its authorities and society at large, even though Cuba has had to face over 50 years of aggression, terrorism and a harsh economic, commercial and financial embargo imposed by the Government of the United States of America. There have been no cases of enforced disappearance in Cuba since the revolutionary triumph of 1959.”

The report went on to state, “the concept of holding a detainee or prisoner incommunicado is alien to criminal and procedural practice in Cuba.”

Do you believe those statements to be true?

Of course the United Nations gave Cuba a favorable stamp of approval.  Alger Hiss is not the only communist to run the U.N.  Beginning with Hiss, according to Constitution dot com, here's a list of who's been in charge of the United Nations:


▪ Alger Hiss – American Communist served as acting Secretary-General in 1945
▪ Trygve Lie (1946-1952) – Leader of Norway’s Social Democratic Labor Party, a known offshoot of the Communist International
▪ Dag Hammarskjold (1953-1961) – Swede who claimed that Communist China mass murderer Chou En-lai was his hero
▪ U Thant (1961-1971) – This leader from Burma expressed admiration for Vladimir Lenin and approved of his goals because they were “in line with the aims of the UN Charter.”
▪ Kurt Waldheim (1972-1981) – This Austrian served as an officer in the Nazi army during World War II. He also engineered the campaign to oust the Republic of China on Taiwan from the UN in favor of Communist China.
▪ Javier Perez de Cuellar (1982-1991) – The Marxist from Peru set as his major goal the redistribution of wealth.
▪ Boutros Boutros-Ghali (1991-1996) – This Egyptian served just one five-year term, but was best known for his open call to end the “absolute and exclusive sovereignty” of individual nations.
▪ Kofi Annan (1997-2006) – The man from Ghana turned out to be very slick but an even more aggressive enemy of national sovereignty.
▪ Ban Ki-moon (2007-2016) – This South Korean pushed for measures ties to the highly fraudulent climate change claims, including advancing many of the goals listed in Agenda 21 and Agenda 2030.
▪ On January 1, 2017, the United Nations appointed Portugal’s Antonio Guterres as the new Secretary-General. he served as president of the Socialist International (SI), which named Karl Marx their organization’s Honorary Secretary in 1864, from 1999 until 2005. “The ultimate objective of the parties of the Socialist International is nothing less than world government.”  After leaving SI in 2005, Guterres became the United Nations High Commissioner for Refugees. According to Alex Newman, Guterres, along with his staff, brought a “tidal wave of Islamic immigration into the West.”  Seeing that the UN is an anti-American and anti-Christian organization, we can count on Mr. Guterres to continue his advancement of Islamic immigration into the West to diminish the influence of Christianity and destroy Western culture and society, thus making it ripe for the tyranny the UN wishes to impose.

“The inefficiency and overspending of the United Nations are well known. We will no longer let the generosity of the American people be taken advantage of or remain unchecked,” Haley said. “This historic reduction in spending—in addition to many other moves toward a more efficient and accountable U.N.—is a big step in the right direction.”

Haley said there might be further budget cuts in the future. President Trump's proposed 2018 spending budget would end funding for U.N. climate change programs and would cut funding to the United Nations Children’s Fund, also known as UNICEF, by 16 percent.

In reference to the man-made climate change hoax, recently the Trump administration chose to reverse course from Obama's policies, eliminating climate change from a list of national security threats.

“Climate policies will continue to shape the global energy system,” a draft of the National Security Strategy said. “U.S. leadership is indispensable to countering an anti-growth, energy agenda that is detrimental to U.S. economic and energy security interests. Given future global energy demand, much of the developing world will require fossil fuels, as well as other forms of energy, to power their economies and lift their people out of poverty.”

President Obama made climate change, and the burdensome regulations that accompany its focus, a primary focus of his administration, including it in his National Security Strategy released in 2015. “[W]e are working toward an ambitious new global climate change agreement to shape standards for prevention, preparedness, and response over the next decade,” that report said.

Obama likened the man-made climate change to terrorism in a speech at climate talks in Paris in 2015.  During a weekly address, Obama later said “Today, there is no greater threat to our planet than climate change.”

In September 2016, President Obama released a memorandum requiring federal agencies to consider the effects of climate change in the development of national security-related doctrine, policies, and plans.


President Trump has decided to reverse direction.  In reference to the United Nations' body disapproving of his decision to strip funding from the United Nations, he Tweeted: "Let them vote against us, we'll save a lot."
1:38 PM - Dec 20, 2017

Trump discussed cutting U.S. contributions to the U.N. during his presidential campaign, along with recognizing Jerusalem as Israel's capital, so none of this is a surprise.  Unlike his predecessors, Trump is constantly working to live up to his campaign promises.

All 193 members of the United Nations are required to make payments as a part of their membership, but the amount each country must pay differs and is calculated by a formula that factors in population and gross national income. The U.S. currently funds about 22 percent of the U.N.’s $5.4 billion annual budget.

Members may also make voluntary contributions, and programs like UNICEF and the World Food Programme are funded entirely by this discretionary funding.

“The United States will remember this day in which it was singled out in this assembly for the very act of exercising our right as a sovereign nation,” said Haley ahead of the vote. “We will remember it when, once again, we are called up to make the world’s largest contribution to the U.N., and we will remember it when many countries come calling on us to pay even more and to use our influence for their benefit.”

Think about this for a moment.  A majority of the countries in the U.N. say they disagree with us, have been working to undermine us, and collude with or are fully a part of communism . . . but they have no problem demanding that we pay for what they do.

Communism and globalism is a parasite, and like a friend of mine said recently, parasites keep up what they do until they kill the host ... and then, they don't even know the host is dead until it is gone.

Or, as Margaret Thatcher said, "The trouble with socialism is that eventually you run out of other people's money."

The next step needs to be full U.S. withdrawal from the United Nations.

-- Political Pistachio Conservative News and Commentary
Posted by Douglas V. Gibbs at 11:11 AM