Battle for the Border Wall 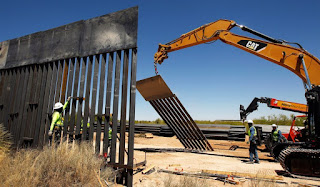 Walls work.  The Democrats wouldn't have walls around their homes if they didn't.  In truth, the Democrats are not against the border wall because they truly believe it won't work, but because they fear it will.

“This isn’t about the Wall,” Trump tweeted, “everybody knows that a Wall will work perfectly (In Israel the Wall works 99.9%).”

President Donald Trump, and his media allies, have vocalized that they believe the opposition to the wall by Democrats is not about the wall, it's about the Democrats doing whatever they can to obstruct Trump and the Republicans.

That's a part of it.  But we must ask "why?" they are so adamant about it.  Why has the wall become such a divisive issue?

Bills have been put forth for funding the wall.  The House of Representatives even passed a government funding bill that would have allocated $5.7 billion to building the border wall.  The bill stalled in the Senate, where it needs 60 votes to achieve cloture, and the Democrats stood firm in their opposition to anything and everything the GOP puts on the table.

House Democrats have also dug in their heels.  Nancy Pelosi (D-California), who it is believed is going to be (the nightmare returns) Speaker of the House on January 3, has repeatedly called the wall “immoral, ineffective and expensive.”

Now, we are in the midst of a government shut-down, and while the mainstream media aligned with the Democrats are blaming the shutdown on Trump, the reality is that the blood of those killed by illegal aliens, and everything associated with not having a wall, is (and will be) on the hands of the Democrats.

Wayne Allyn Root writes, "If Democrats actually loved America and cared about the safety of our children, it could get done. But it's clear they don't."

That's because there are two things the Democrats love much more than America, or the safety of any American (much less any of our children).  Power and money.

It is very curious to me that the Democrat politicians become among the wealthiest people in America on a salary of less than $200,000 per year.

Some of that wealth our politicians accumulate comes from investments, partly based on insider information they are privy to while holding a seat in the U.S. Government (a kind of shared information network you and I would be arrested for participating in).

They also do other things.  Underhanded things.  Illegal things.

For those of you doubting that the Democrats are willing to sell out their alleged values for power and riches, let's not forget California State Senator Leland Yee (D-San Francisco), one of California's strongest advocates for gun control, who was arrested in 2014 for scheming to defraud citizens of honest services and conspiracy to illegally traffic firearms.

On the national front, the economy is booming.  The dictators of the world are retreating from their aggressive policies which were emerging right and left (mostly left) during the Obama administration as a result of President Trump's firm hand when it comes to foreign policy.  American consumers are buying like crazy.  Retail sales are soaring in the middle of a stock market bubble of trouble (of which I believe is being orchestrated by those hoping to hurt Trump's economy so as to help the Democrats in 2020).

As America moves in the right direction, the people opposed to Trump and his GOP allies are becoming more and more bitter, angry, hateful and negative toward our president.  Is it because they are jealous?  Do they fear he is hurting them politically?

They are angry because Trump's policies, including a border wall, hurts them in the pocketbook.

If government is running right, and transparency is reigning supreme, the Democrats can't do their backroom deals, and they can't perform their underhanded, behind the scenes (and often illegal) dealings which probably includes foreign money, drug money, and hidden servers in high ranking political bathrooms.

And let's not just blame the Democrats.  There are an awful lot of Republicans doing similar things.

Why did we go into Afghanistan, and stay forever?  Why not go in, blast the bad guys, and leave?  Could it have been so that we could keep an eye on the poppy fields?

A border wall not only will stem the flow of illegal aliens, but also the flow of drugs into the country, and I think there is a long list of American politicians benefiting monetarily off of the drugs coming across the border who fear the wall because that means less money in their pockets.  While a wall won't completely stop that flow of drugs across the border from Mexico, it would make it a lot more difficult, and expensive, to import illegal drugs.

And, I think the political establishment would stand to lose a lot of money if that were to happen . . . and that's enough to royally tick them off and make them fighting mad.

Meanwhile, their B.S. arguments about illegal aliens are taking off wonderfully among their brethren who are ignorant about what the opposition to the wall is really all about.  Alexandria Ocasio-Cortez, the young socialist who just got elected in New York to the House of Representatives, actually compared illegal aliens who are invading our country en masse to baby Jesus.

Trump campaigned on building the wall in order to secure the southern border.  I am glad he is holding firm.  If he does not, and gives in, it would be his own "read my lips, no new taxes" moment, like the one that ruined George H.W. Bush's chances for reelection in 1992.

The invasion from Honduras, El Salvador and Guatemala through a longer caravan route than necessary up the central gut of Mexico is just a part of the international desperate attempt to stop the wall, and I have no doubt these obstacles to border security are being organized and funded by various leftist characters not only from the United States, but those dependent upon the power and money they receive from a porous border worldwide, as well.

Israel constructed a wall along their border with Egypt between 2010 and 2013, consisting of both a wall and a fence, to stem the flow of asylum-seekers from Africa. The number of illegal crossings dropped from 9,570 in early 2012 to just 16 in 2016.  Street-level terrorism along that area has also been reduced.

The evidence shows that a wall is what we need, but in truth, the Democrats fear it, because they know it would be effective, and such effectiveness is not good for their flow of money, and their grip on political power.

Well, there's that, and all of the potential Democrat voters flowing over the border, which the liberal left progressive commies believe would enable them to remain in power in perpetuity.