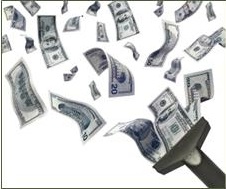 Wealth is created.  However, the liberal left hates wealth (unless it's theirs) and so they want you to believe wealth is finite.  Therefore, if you do well, someone else must suffer.  You know the old saying . . . the rich get richer, and the poor get poorer.

Besides, according to them, it's not your money, anyway.  The government is letting you use it, but it's really theirs, and they will tax it away from you any way they can to make sure they are able to retrieve their monetary property.

Then again, it's not even theirs, either, for they borrowed it from the Federal Reserve, after all.

The problem with that whole scenario is that is not supposed to be their money.  It's yours.  And, when you get to keep more of what you've worked for, it's good for the economy . . . which is, in the eyes of the left, bad, because if the economy is good, you don't depend upon them, and you are more than happy to flex your muscles of individuality and self-reliance.

How can equality (equally miserable, anyway) be achieved if you are doing well and keeping more of the money you have earned?

The problem is, the President of the United States, and his Republican Congress, cut taxes across the board a year ago.  That means the rich got to keep more of what they earn, too.  That's enough to tick off just about all of the socialists in the Democrat Party.  But, the liberal left Democrats in Democrat-majority States have decided they should be able to nullify the federal tax cut.

The 2017 law capped state and local tax deduction, which basically made it so that low state tax States would essentially be subsidizing high tax States assault on wage earners.

With Democrats in the majority in the House next year, the Democrats are ready to reverse the rules. The States, with their own laws, are also working to play games so as to keep more taxes.  After all, why would they want to let you keep more of your own money?

Oh, yeah, that's right.  They think it's their money.

Leading the charge on legislation to renew the tax rules Trump's team got rid of is New Jersey Rep. Bill Pascrell, a senior Democrat on the powerful Ways and Means tax writing committee. “We’re working on it now,” said Pascrell, adding that the move is “a priority” for the committee.

“We’re going to have hearings on it,” said Democratic Rep. Mike Thompson of St. Helena, another senior Ways and Means member. “We’re going to look into the whole tax code and see what we need to do” to adjust the Republican-backed law.

Either they change it now, work for both Houses of Congress to work on it later, or they can wait until the "cap" provision expires in 2025.

According to the nonpartisan Tax Foundation, just six states – California, New York, New Jersey, Illinois, Texas, and Pennsylvania – claimed more than half of the value of all of the said deductions nationwide. California alone was responsible for nearly 21 percent of all of those kinds of deductions.

The politicians call it the "SALT cap" and the "SALT deduction".

New York and New Jersey Republicans vehemently opposed the cap and voted against the 2017 tax overhaul as a result. Most California Republicans, however, voted for the legislation.

A lot of those suburban Republicans were swept out in the November election (regardless of whether they voted for or against the law).