Coronavirus: The Truth Begins to Bubble to the Surface 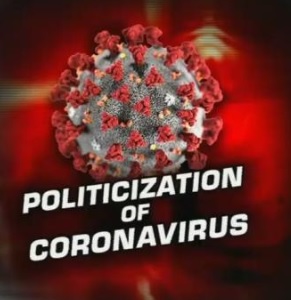 I feel vindicated.  A USC study has shown that with the new numbers of known cases, the asymptomatic portion of the population who has contracted the coronavirus is above 96%, and with the estimated cases number climbing sky-high, it plummets the fatality rate to way below that of the seasonal flu.  Shelter-in-place, as I've been saying, is turning out to be bad policy, and instead "herd-immunity" was the better way to go (again, as I've been saying for the last couple months).  The mild disease was nothing to be afraid of, we should have gone about our own business (instead of destroying the economy as the lefties have been so hungry for), built up antibodies if we got sick (yes, some people would get very sick, and even die, but in the long run more will die because of what we did), so that if the virus comes back next year, mutated and stronger, we have the immunities to fight it off.  Now, because we ran and hid from the virus, most of us don't have those antibodies, and the stronger virus, if it comes back, could be what we feared this one was.

A Stanford Study, led by Stanford epidemiologist John Ioannidis, whose work I referred to way back in March in an article I wrote about all of this, provides similar numbers to that of USC's study (and on television I heard about another one in New York with similar results) and with hindsight being 20/20, they are discovering what I've been saying all along ... running and hiding from the virus with stay at home strategies may not have been the best way to deal with the coronavirus.

Dr. Birx is now, as are many so-called experts, avoiding questions regarding how it is turning out that the coronavirus is milder than the seasonal flu.

I've been saying the same thing for months, and I have been called "fake news," political pistachio has been banned on Facebook, five other social media sites have closed my accounts due to my stance, and I don't dare say anything on You Tube because they've said straight out if anyone says anything on a video that disagrees with the World Health Organization (who has been wrong this whole time), they will shut down the video (can't find a link ... of course ... but I remember it being said on one of the radio programs or television programs I was tuned into).

The CDC now admits the doom and gloom was not exactly correct.  Fox News correspondent John Roberts, upon hearing the news about the mortality rate being much lower than originally told to us asked, "So, it was a hoax?"

Q, myself, and anyone who disagreed with the hard left narrative (which shifted from a position of no-worry-at-all until they realized they could use the coronavirus as a political weapon) were considered a danger to society and a public health threat, and everything was done to shut us up.  The paranoia and hysteria was out of control, and now that the dust is settling, the sheep and lemmings were wrong, and we were right.

I am not boasting, or trying to dance around as if I am wonderful.  This is a lesson that needs to be learned.  The establishment and leftist politicians lie and use everything for political expediency.  The liberal left media lies, as does all of their allies in the Democrat Party, the United Nations, and any other left leaning organization or party.  Quit being mindless automatons, and think, for once.

The coronavirus in the very beginning revealed to us its true, mild, nature, but everybody was too busy panicking over the leftist narrative (and I am figuring their desensitization thanks to a never-ending onslaught of pandemic and/or zombie movies and video games) that they didn't stop to notice that this was not the World War Z, or the Hollywood Outbreak, or the zombie apocalypse we have all been expecting to hit us, someday.

Did the coronavirus kill some people?

Yes, but not like they were saying.  I have a better chance to be struck by lightning during a storm than I do of dying from the coronavirus.

Do we influence the climate at all?

Yes, but it is so such a small amount of influence that it is negligible.  The truth is, we cycle through warm periods and ice ages ... naturally, regardless of our activities as humans.  We are blaming our less than one percent of contribution of carbon dioxide, which is a minor gas in the atmosphere, for things we actually have no control over.

Stop being a lemming.  Go out and take your face mask off, and drive your gas-burning vehicle all you want.  You are not going to save humanity, or the planet, if you do the opposite.

Thanks for caring, but let's pick real battles that we can have an impact regarding, like stopping socialism in America, protecting our gun rights, and supporting the free market with our participation in it (in short, don't vote Democrat, and buy more guns).  Those are much more noble causes, and real ones that aren't there just because the Democrats are searching for a political weapon.

Which brings to mind a thought.  Should we begin to use legislation to ban assault Democrats?  Not all of them, just the ones that are military strength stupid.

As we look at events surrounding the "COVID-19 pandemic," various questions remain unanswered. On Oct. 18th of 2019, only weeks prior to ground zero being declared in Wuhan, China, two major events took place. One is "Event 201," the other is the "Military World Games," held in none other than Wuhan. Since then a worldwide push for vaccines & biometric tracking has been initiated.

At the forefront of this is Bill Gates, who has publicly stated his interest in "reducing population growth" by 10-15%, by means of vaccination. Gates, UNICEF & WHO have already been credibly accused of intentionally sterilizing Kenyan children through the use of a hidden HCG antigen in tetanus vaccines.

Congress & all other governing bodies are derelict in duty until a thorough and public inquiry is complete.