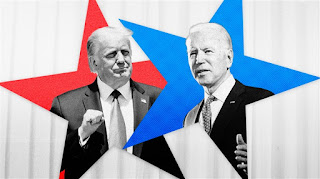 The most asked question I receive as we approach Christmas of 2020, thanks to a thorough mess when it comes to the election last November, is who will be President of the United States on Inauguration Day, 2021?  Donald J. Trump, or Joseph Biden?

The acknowledgement of the presence of evidence regarding fraud in the 2020 presidential election seems to increase the further right you lean.  Leftwing media types and the politicians who creep around with their seductive lust for power in the darkest shadows of the deep state claim that there is absolutely no evidence of any wrong-doing by anyone, especially by leftwing allies, during the election.  Trump supporters have laid claim to a different story, often recounting harrowing tales of shipped in false ballots that suddenly appeared after midnight fresh in from out of State, manipulated voting machine programming, and secret suitcases full of fake ballots pulled out from under tables where they had been hidden until the observers of the evening departed from the building after being told they were finished counting for the evening.

Lawsuits have been filed by the Trump team, by outsiders who feel they have a vested interest, and even by States who believe that four States in particular broke their oath to the Constitution when they violated the founding document by allowing the manners and procedures of the election to be changed by their governor or secretary of state, when the Constitution is clear that any such changes are only to be proposed by the State legislatures.  In each case, the courts are dodging right and left, mostly left, to avoid getting involved in the shenanigans.

The lawsuit by Texas was even shot down 7-2 due to lack of standing ... even though in Article III, Section 2 it clearly states that among the jobs of the federal court system is to resolve controversies between two or more of the States.

So, here is what it all comes down to.

The electors, who were unconstitutionally appointed in the first place by the political parties while in Article II of the Constitution it is clearly the job of the State Legislatures to appoint the electors, voted on December 14, 2020 based on the information given to them by the media and the false election results.  In Congress the President of the Senate, Vice President Pence (according to the 12th Amendment, something I had to re-realize recently - my apologies to my Temecula Valley class for forgetting about that part when asked a week ago) will open the envelopes on January 6 to count and certify the votes.  If three of those States in question (Georgia, Pennsylvania, Michigan, Wisconsin, Arizona, Nevada) turn out to not have their electoral votes awarded for any reason, be it challenges from the floor of Congress, or because the result of a court case leaves the election invalidated, nobody achieves 270, and the vote will immediately devolve to the House of Representatives, where they would immediately vote for President on a one-vote-per-State basis.  If that happens, Donald Trump will be inaugurated on January 20.  If that does not happen, then Joe Biden will likely be President on January 20 ... despite the fraud, the lying, and the cheating ... and for a season evil will prevail.