Marbury v. Madison (1803), and the birth of Judicial Review 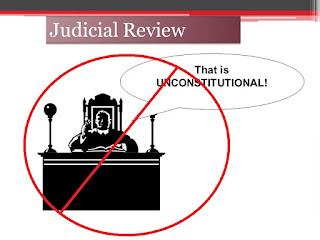 When John Adams lost the 1800 Presidential Election, the Federalist Party also lost both Houses of Congress to the Jeffersonian Republicans.  Determined not to lose all power in government, the Federalist Party decided to grab what they could in the judicial branch.  Thomas Jefferson, in 1801, wrote to Joel Barlow regarding the appointment of the Midnight Judges, “The principal [leaders of the political opposition] have retreated into the judiciary as a stronghold, the tenure of which renders it difficult to dislodge them.”

William Marbury was one of the many inferior court judges to be nominated and confirmed by the U.S. Senate during the waning days of the John Adams presidency.  However, outgoing President John Adams’ Secretary of State was unable to issue all of the commissions prior to Jefferson’s inauguration day.  The new Secretary of State, James Madison, refused to deliver the left-over commissions after President Jefferson told him not to, the latter labeling them illegal, null, and void.  Marbury sued Madison to obtain his commission and the case eventually worked its way up to the United States Supreme Court.

The Secretary of State under John Adams also became one of the midnight judges, appointed to Chief Justice of the United States Supreme Court just prior to Jefferson taking office.  As a result, Chief Justice John Marshall presided over the Marbury v. Madison case that arrived in front of the Supreme Court in 1803.  In his judicial opinion regarding the case, after Marbury’s victory, Marshall used language that has been interpreted as establishing the principle of judicial review, a concept that basically allows the courts to check Congress and the Executive with the ultimate power of striking down or modifying legislation and executive orders offered by either of the other two branches of government.  Eventually, the power of judicial review was expanded to include the ability to strike down State laws, actions, and judicial rulings, as well.

Chief Justice Marshall wrote, “A Law repugnant to the Constitution is void.”  Those words declared that the courts could strike down as unconstitutional a law passed by Congress and signed by the President.  While there is nothing in the Constitution giving the Court this specific power, Marshall believed that the Supreme Court should have a role equal to those of the other two branches of government.  The judicial branch was originally intended to be the weakest of the three branches, with only an authority to apply existing law to the cases they hear.  Any review of the law could only be addressed through a written judicial opinion directed to the legislature, with the Congress still holding the authority on whether or not to repeal the law in question.

When James Madison, Alexander Hamilton, and John Jay wrote a defense of the Constitution in The Federalist, a series of essays to the State of New York to convince the State whose leaders were largely in agreement with the Anti-Federalists to ratify the new Constitution, they explained that the new general government contained built-in restraints.  The branches may only operate based on authorities granted expressly in the Constitution.  The concept that the federal government’s authorities only exist if they are expressly enumerated in the Constitution has become known as the “enumeration doctrine,” but the concept is only accepted among constitutionalists who believe in “original intent,” and is frankly not accepted as legitimate by the mainstream political class, or judiciary.

While the strongest of the three branches was originally intended to be the Congress, which could override vetoes, override unconstitutional rulings or judicial opinions, and impeach and remove officials, including judges or the President himself, over the last two centuries the hierarchy has been flipped.  The original role of the federal courts, including the Supreme Court, was originally a minor one, one that was unacceptable to a strong-minded nationalist like Chief Justice Marshall.  With his establishment of judicial review, the courts have risen to the top of the food chain in the American political system, with the self-enshrined role of the Supreme Court to invalidate Federal and state laws that are contrary to the Constitution never experiencing any serious challenge.

Combined with the Hamiltonian concepts of implied powers and an “elastic” view of the Necessary and Proper Clause, the progressive left has re-written the Constitution by simply interpreting it in a manner that pleases them, and forwards their narratives.  “The Constitution of the United States,” said celebrated hard-left Democrat Woodrow Wilson, “was not made to fit us like a strait jacket. In its elasticity lies its chief greatness.”

According to the American liberal-left the Constitution is a living and breathing document that is not specific enough in its language, giving them the opportunity to view the document as being a set of guidelines that can be bent and twisted as they desire.

The Marshall decision and judicial opinion regarding the Marbury v. Madison case in 1803 completed the leftwing’s early assault on the American system of checks and balances, providing a check by the courts that was never intended, and never authorized by the Constitution of the United States.  The power of the federal government, from that moment, grew not only in size and scope, but inward against the interior of the States and against the role of the States as a major check against federal overreach.  Thanks to Marshall’s insertion of judicial review into Marbury v. Madison, the federal government freely enacts, interprets, and usurps as it pleases, free from any challenges by constitutionally minded forces of opposition.  Whether those patriots who support the rule of law like it or not, the tyrants have control over any interpretation of the document.  What that means is that with judicial review in place the progressive left can pretty much do as they please without any worry of the judiciary acting as an arm of opposition, and without the worry that any other forces can penetrate their wall of leftist judges to stop any unconstitutional activities by progressive infiltrators who are, at this point, deeply embedded into the political structure of the American System.

In the end the reality is the only way to restore the system back to its original form is for the States to take action without utilizing the judiciary.  Such State tactics may include, but would not be limited to, Republic Review, Article V. Convention, Nullification, and zeroing in on mechanisms that have moved us away from being a republic (such as the 1964 Supreme Court case, Reynolds v. Simms).