The Hunt - The Movie; Worth the Controversy? 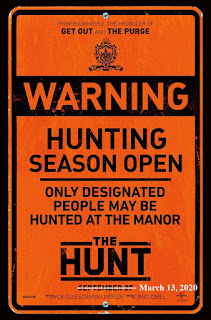 When the movie, The Hunt, was in production sometime between March of 2018 and September of 2019 word got out that it was about liberal elites hunting conservatives on some out of the way piece of land.  The movie was being put out by the same folks that were behind The Purge movies, so the basic themes of the movie shouldn't be a surprise.  The roles of the hunters and hunted were obvious from the beginning as information about the movie leaked out since words like "deplorables" and "rednecks" were being used to described members of the group being hunted. Conservatives got ticked off, and the general public got angry that such a tale would be spun.  People assumed it was basically a wet-dream for the liberal left in Hollywood to put out such a film, and "the right" was appalled that The Hunt wound up coming out in 2020 just in time to play games with the minds of the voters during an election year.

The movie was originally intended for release September of 2019, but between the advent of the Dayton and El Paso shootings in August (or at least that's the excuse) and the rising criticism and controversy being put out there by the Trump administration and not-so-liberal media outlets, Universal Pictures decided to delay it.  When the movie was finally released in theaters, it was March 13, 2020, just as the COVID game was stepping up to the plate to take a swing for the fences.  The timing of the release, which coincided with the closing of theaters countrywide, makes it difficult to determine if the mere $16 million gross at the box office was due to the ill-timing of the release, the mixed reviews from critics, or the decision by conservatives to essentially boycott the film.

Now that I got a chance to watch The Hunt (which I did as I work on my next book; yes, I can actually multi-task when I want to) I am not sure when it came to writing it if the brains behind this thing were on one or the other side of the political spectrum.  I definitely am not sure if it was intended to be a serious horror flick, a political propaganda film, a comedy, or a little bit of any of those choices (or bits and pieces of a dozen other possibilities buzzing around in my head). In fact, I caught myself not only disgusted by a lot of it (I am not into Hollywood gore), but I also found myself laughing out loud a few times, as well.  One thing I do know is that if liberals wrote it they revealed how ignorant they are through their leftist characters. If conservatives wrote it, they revealed how ignorant they think progressives are through the leftist characters. If a non-partisan "I-don't-give-a-rat's-behind" about politics kind of person/people wrote it, they did a pretty good job at depicting how hate-filled and ignorant the liberal left in this country truly is.
One thing is for sure: "The Hunt" tapped into what the liberal left wishes they could do with conservatives in America (especially those who supported President Donald J. Trump) if they could get away with it and not face any consequences for such actions, and it tapped into what conservatives truly think the liberal left wishes they could do if given the chance.
*Note: That was a general statement...yes, I am aware that not all liberal left Marxist socialist commie bastards are blood-thirsty animals who wish everyone who opposes them politically to be dead...and yes, I realize that not all conservatives were fans of Trump, or think that the big bad liberal left truly wants them all dead.  That said, I think the size of the segments of the population who do fit into the "this could be a true thing if they had the chance" group is much larger than we may truly realize.

The basic summary is that twelve strangers, who you realize pretty quickly are likely "Trump supporting Make America Great Again" kind of folks, and/or conspiracy theorists who have tugged a little harder on a particular lefty political string than the liberal left would prefer, wake up with gags in their mouths and far from home. They were abducted from various locations in the United States and have no idea where they are, or why they are there. As the movie progresses, and the ranks of the hunted drop one by one, we began to discover why the hunted were "chosen", and that these "redneck" idiots are not the dummies the liberal left elitist hunters assumed them to be (well, some of them are, but not all of them; and some of the seemingly cuckoo ones turn out not to be so wrong in some of their assumptions, after all). From beginning to end the movie is wicked and gory, but that horror-movie-blood-and-guts-stuff is a disturbing artistic necessity to help you understand how out-of-their-minds-crazy the hunters truly are. Yes, it (the movie) was sick, inappropriate, violent, demented, and the kind of thing (at first) that the thugs who populate the snowflake driven "cancel culture", and their leftist political class counterparts, must be dreaming about. But, then again, anytime I clean my guns and hear that some people expect blood in the streets as a result of the sharp division in this country we are experiencing, I realize how stupid of an idea that truly is coming from a bunch of anti-gun, pansy, metro-sexual, confused (in multiple ways), Marxist tools who couldn't win any fight unless they are a part of a bunch of black-clad Antifa or Black Lives Matter thugs swarming single individuals with their mob tactics like the cowards they truly are.
Then again, if they enlist blue helmets and Chinese troops to march on our streets, the outcome could be a little less preferable than we have all originally thought.

At least Hillary Swank's leftwing, deplorable-hating character in this film had the sense to prepare with months of intense training, you know, just in case "Snowball" turned out to be a bad ass.

Appalling, or not, The Hunt was entertaining enough to keep my attention, and thought provoking enough that it convinced me to write this piece about it.  As they say, "Don't knock it until you try it."  Yes, you'll likely be disgusted by the demented nature of the film, but by the end you might not be as offended as you thought you might have been in the first place ... you know, since one of those being hunted turns out to be pretty nifty in the end.