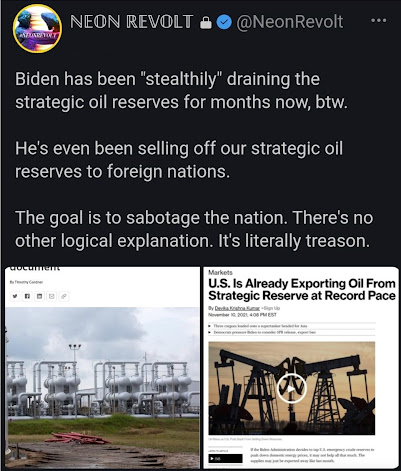 Oil prices have climbed through the roof with Biden in place.  He blames oil companies for anti-consumer behavior after the democrats killed our energy dependency by stopping domestic drilling and domestic pipelines and then put us into a position to buy our oil from our enemies.  Meanwhile, as we stop using our own oil, and pay through the nose from international pirates, he begins selling our oil reserves.

This is nothing less than energy destruction in play to force you, whether you like it or not, into unreliable "renewable" energy that is not renewable.  But, who's to worry?  Once they kill off a large portion of the world population with their depopulation schemes, having enough energy for everyone will stop being a problem.