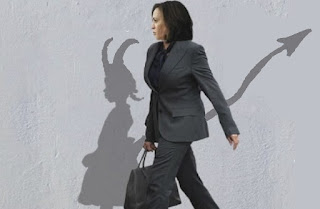 Kamala Harris was acting president for 85 minutes while President Joe Biden got a colonoscopy.  The mainstream media made it sound like she was the first female president.  She wasn't.  She was technically only acting president.  Yes, though, she is the first woman in history to have the presidential powers of an American President.  Never mind that Brandon's...I mean Biden's presidency is a false one because of election fraud, and she's not legitimately in her seat because she's not eligible for office due to not being a natural born citizen (being born in Oakland doesn't matter if your parents were here on student visas).

Do you really want a precedent that opens the door for anchor babies (which are not really citizens based on Senator Howard's May 30, 1866 congressional testimony regarding the 14th Amendment's Citizenship Clause) to become President of the United States?  What's next?  Rulership based on aristocratic marriage strategies regardless of where the new Marxist is from?

My thinking is the hoopla over Harris (who has a 27% approval rating) is to cover up the fact that it was proven they were all full of crap over Rittenhouse.*

* See Rittenhouse not guilty on all charges...