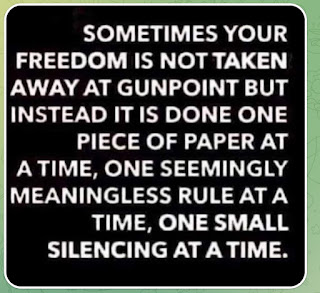 A follower of my constitutional literacy efforts recently asked me about what international human rights court we could use to go after the human rights violations being committed by American Politicians (specific human rights being violated were not listed in the email). I responded, "No polity has jurisdiction over the U.S. Constitution, so first of all, use of such a court would need to be regarding foreign issues not applicable to American Law. Second, as I understand it, the international court regarding human rights is a final stop for cases that have already exhausted appeals in lower international courts, and are directly related to a country's violations regarding human rights. Therefore, before you reach that court you will need to figure out how to begin navigation through the lower courts to work your way up to the international court regarding human rights."
The emailer was bothered by my response.
"So all American courts are here to crap on our human rights so the criminal justice system is our enemy as well this will not go well for police officers because I'm learning they are not there to protect the people but the law and court we are screwed and do not trust any law enforcement because they are breaking the constitution with their BS law so sounds like we need a civil war to take out the true criminals."

I responded to his anger with, "It is our responsibility to fight human rights violations. Do you really want to allow a centralized international polity to dictate to your government what it can or can't do regarding human rights?"
The discussion is actually a common theme on a number of topics I deal with.
The Founding Fathers believed in "localism".  If tyranny is going to be staved off, among the tactics to accomplish that feat we must include "localism".  In fact, localism is among the primary keys to ensuring that a system remains anchored in liberty.
Localism basically means, "local issues, local governance."  City issues should be handled by the local city government.  County issues by the county government.  State issues by the State government.  External issues and issues pertaining to protecting, preserving or promoting the union must be handled only by the general government, which in the case of the United States, is the federal government.
We do not have a national government that is designed to handle everything, its authorities only include those things enumerated in the Constitution as powers of the federal government.
This is often a discussion I have with people when it comes to the Bill of Rights.
The Enumeration Doctrine, which is supported by the Tenth Amendment, provides that only enumerated powers belong to the federal government, and if a power is not delegated to the federal government, nor prohibited by the Constitution to the States, the power belongs to the State governments to handle.  This is the standard political formula that was used by the United States Supreme Court regarding the Dobbs v. Jackson case.  There are no authorities regarding abortion, medical procedures, or any other health care item, listed in the U.S. Constitution, therefore, the federal government's claim that abortion was legal throughout the United States as per 1973's Roe v. Wade was an erroneous decision, and now the issue has been sent back to the States.
It is not the federal government's authority to be involved in any issue that it has no constitutional authority to be involved in.  Congress can make no law regarding those issues, the President can execute no action regarding those issues (especially if no law exists regarding the issue in question), and the judicial branch can hear no arguments regarding those issues the federal government has no authority over, and if acting constitutionally, that there are also no laws in place, regarding.
An issue that makes this argument a challenging one is the right to keep and bear arms.
Guns are not mentioned in the first seven articles of the U.S. Constitution, therefore, the federal government, as per those articles, has no authority to make any law (nor execute or administer judicially) regarding firearms.  In the Preamble to the Bill of Rights the text explains that the purpose of the Bill of Rights is to "prevent misconstruction or abuse of its powers."  The "it" mentioned in that sentence refers to the U.S. Federal Government.
The Second Amendment is included as a part of the ten amendments to the Constitution that makes up The Bill of Rights.  Based on the language of the Second Amendment ("shall not be infringed"), and the explanation in the Preamble to the Bill of Rights that the Bill of Rights only apply to the federal government, we may conclude that the article dictates that every single federal gun law, all of them, are unconstitutional.  The federal government has no authority whatsoever to demand background checks, limitations on magazines, or ban any type of gun of any kind.  That is not to say that no background check laws, or any other gun law, is impossible to put into place.  The authority, from the point of view of the Framers of the Constitution, was that our rights (including, but not limited to those enumerated in the Bill of Rights) are something that only local government (States, and more local governmental bodies) may make laws concerning.
James Madison explains the localism concept in Federalist Paper #45 (https://avalon.law.yale.edu/18th_century/fed45.asp):

The powers delegated by the proposed Constitution to the federal government are few and defined. Those which are to remain in the State governments are numerous and indefinite. The former will be exercised principally on external objects, as war, peace, negotiation, and foreign commerce; with which last the power of taxation will, for the most part, be connected.

The powers reserved to the several States will extend to all the objects which, in the ordinary course of affairs, concern the lives, liberties, and properties of the people, and the internal order, improvement, and prosperity of the State. The operations of the federal government will be most extensive and important in times of war and danger; those of the State governments, in times of peace and security.
Which brings me back to my response to the emailer.  "Do you really want to allow a centralized international polity to dictate to your government what it can or can't do regarding human rights?"
Let's expand that.
Do you really want the federal government, including the courts, to dictate to your local government what it can or can't do regarding local issues?  Do we want the federal courts to dictate to our States what they can or can't do regarding our right to keep and bear arms, our right to pursue the health insurance or health services we wish to pursue, how to educate our children, if we can pray in the public square, or whether or not our State has laws that support or do not support abortion?
None of those local issues are any of the federal government's business.
Our rights are natural rights, given to us by God, so even local government has great restrictions regarding those issues; but, local government may make necessary laws regarding our rights.  If they go too far, then we need to use our voice as a people to stop them, to correct them, and to ensure that local tyranny doesn't rise up.  That is not up to the federal government to police, or some international judicial body.  It is our responsibility.  If our government, be it federal, or local, is acting out of its proper authorities, it is not for us to run to some potentially tyrannical international court to fix it.  It is our job, as citizens, to maintain and correct our own government system.
-- Political Pistachio Conservative News and Commentary
Posted by Douglas V. Gibbs at 3:22 AM