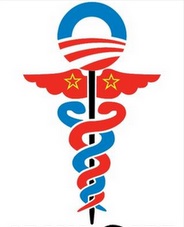 My wife and I were slammed by a vicious head cold this week.  I was able to fight it off with over-the-counter medicines, but my wife's history of bronchitis encouraged me to take her into the family doctor a few days ago.  We don't have health insurance, but are exempt from the Obama administration imposed fine because we are in the Veteran's Administration system.  However, because the bureaucracy is such a mess, we've never really been able to work our way through the red tape to get our VA benefits working right.

When it came time to pay for the medical services at our family doctor, the woman behind the counter asked about our insurance.  "None," we replied.

She was confused.  She didn't know what to do.  "Everyone has insurance."

"No," I said, "Everyone has been ordered by threat of penalty to have insurance.  We don't."

"You know," she said, "Covered California is easy and inexpensive."

Covered California is the Golden State's Obamacare exchange, and it is a mess.

"No," I said.  "We could afford insurance before Obamacare.  The Affordable Care Act jacked up our costs, and made it unaffordable.  Now, we can't afford to purchase private insurance."

She didn't know what to say.  She, I am figuring, fully believes the propaganda about how wonderful socialized medicine is.  She has likely bought into the propaganda that "health care is a right," and it must be guaranteed by the government as a result.

The doctor stepped up.  "Charge them the 'cash' rate."

He threw a wink my way, and a slight grin.

My discussion about Obamacare with the medical office administrative worker brought to mind the many conversations I have had about the liberal left's wondrous love of socialized medicine.  While, on the surface, "free" healthcare seems great, I am reminded of the saying by conservatives, "If you think health care is expensive now, wait until it's free."

A friend of mine lives in Toronto, and as she explained to me, "In the beginning, socialized medicine was great.  Then, the government began to realize how expensive it could be.  They began to refuse to cover certain procedures.  Eventually, it got to the point where, if you went to the doctor, the government health care program covered such a limited amount of things that we had to get supplemental insurance."

Now, my costs under Obamacare have gone even higher, and I simply can no longer afford to purchase health insurance.

When Trump says he plans to "repeal and replace" Obamacare, my attitude is, "No, just repeal the monstrosity."

Amen.
I hope you and your wife are feeling better.