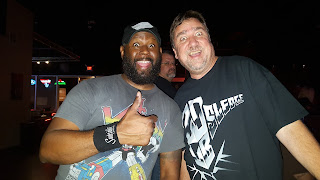 Among my favorite YouTube video folks is Alfonzo "Zo" Rachel.  He's a fantastic musician, too.  And, well, to those of you who are on YouTube a lot, you know that he is a Christian Conservative patriot who makes great videos.  I've been following him for ten years. . . and, he's been following me.  I have to admit, early on he remembered "Political Pistachio" better than my name. . . but that tends to be the case with most folks.  Name?  Doug?  It's not Mr. Pistachio, Mr. Political Pistachio, or Mister Constitution (or "that constitution guy"?)

We first met online as fellow bloggers with different media styles (his through video, me through blogging), and I even had him on my radio show early on.  Way back then it was internet radio.  I didn't get on AM radio until 2011 (and KMET is my second station, after a few year stint on another station).

After years of talking about it, yesterday we finally got together for lunch - after we discussed finally making it happen two Sundays ago at the AFA Heroes of Conscience Awards dinner (where I also spent time talking to David Horowitz, Bill Whittle, Sabo the Street Artist, Evan Sayet, and Jim Simpson -- all of which, except for Sabo, I have met before. . .and in the case of Evan Sayet I am good friends with).

For those who know me, it will be no surprise to you that when Zo and I had lunch, yesterday, I did most of the talking.

We talked about the fact that since he lost the PJ Media gig (PJ Media decided to close their video operations) he's been a target, largely on YouTube, and has lost his ability to monetize his videos.

And, we talked about my work with Congress of Racial Equality, of which I am having a big meeting in Las Vegas concerning on Wednesday.

I want Zo to be our media and promotions guy, and one of our spokespersons.

I will let you know how that goes, as it progresses.

We got together at a very good Las Casueles Mexican Restaurant in Palm Springs, in 104 degree weather.

Whew, it was hot outside.  We parked in a multi-level garage a couple blocks away.

My wife joined us, and Mrs. Pistachio was impressed by Zo (and that's hard to do when it comes to my wife who has very discriminating expectations).

I also invited him to the July 15 event in Wildomar to see Niger Innis and Tim Donnelly speak.  He said he'll check his calendar.

I believe Zo and I are prepared to join forces. He's definitely on board regarding what I've been doing.  He saw me give a Constitution presentation at the Banning-Beaumont-Cherry Valley Tea Party a few months back, and was very approving.

Here's a video in case you're not sure who I am talking about. . .

I will let you go as the growing opportunities between Zo and I develops.