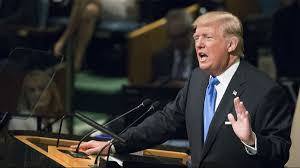 If any of Trump's speeches prior to his recent address to the United Nations were home runs, then that makes his speech to the U.N. a grand slam.

And it is driving President Donald Trump's enemies absolutely crazy.

While his detractors have been claiming since he first burst upon the scene that Trump was an isolationist, the truth is he is a leader, and wants America to regain its title as a leader on the world stage.  When speaking to the U.N., Trump laid out a clear and unmistakable message regarding his view of what American global leadership must be, and as it exists based on the principle of state sovereignty.

The liberal left media and politicians went into hysterics because Trump's message was in direct opposition of their global view of a future world under the socialist fist of collectivism.

Trump stated individual responsible nation-states need to join the United States in taking on what he called the "scourge" of "a small group of rogue regimes".  He pointed out that the enemy has no respect for their own citizens nor the sovereign rights of other countries.  He then pointed out, to the consternation of every globalist and collectivist in the progressive leftist socialist commie movement that the mission he seeks can only be accomplished if we recognize that “the nation-state remains the best vehicle for elevating the human condition.”

While the United States remains the lone shining beacon of liberty, when the Berlin Wall fell, the communists did not disappear. They dug in.  They infiltrated.  They now roam the halls of governments, and the halls of the United Nations, with a collective goal of taking over from within, of establishing global institutions, and eventually realizing the Marxist dream of a world that operates under a code of equal misery under the iron fist of a powerful ruling elite.

Trump put America out front, and told everyone that if we are to stop the madness, it is the job of the United States to take the lead.  He slammed the world for their collectivism, and established that his foreign policy is not just about placing America First, but placing liberty first.  His is not a call not for isolationism, but for global leadership by responsible nation-states willing to follow America's lead.  Trump sounded like the American spirit that arose during and after World War II, where the U.S. realized it is our leadership that must be used to confront wickedness, and defeat evil.

Peace through power and strength, and leadership by grabbing the horns and leading the way.

Trump's message included a stab at Russia and China, as well.  He said, “we must reject threats to sovereignty from the Ukraine to the South China Sea.”

He was not shy about delivering a strong message to North Korea, either.  He called Kim Jong Un "Rocket Man" (though, I think "Rocket Boy" would have been more accurate), and said Kim "is on a suicide mission for himself and for his regime."

Trump was clear about where he stands when it comes to the communist dictator in Pyongyang, stating that he believes "the United States has great strength and patience, but if it is forced to defend itself or its allies, we will have no choice but to totally destroy North Korea."

The socialists of the liberal left shuddered with fear.  They cried, and complained.  But most of all, they feared that the message would resonate with Americans, and the world, and the liberal left realized that they couldn't spin it with hate and vitriol because the public was watching and listening as Trump delivered his words, and they appreciated it.

Trump ensured that everyone understands that the United States, and the U.N., must be "ready, willing and able" to take military action if necessary to deal with North Korea.  But, the message was also pointed at Russia, China, Iran, and any other player who wants to make trouble.  The message was that nobody will be permitted to threaten American cites with nuclear annihilation, or threaten American interests with expansionist activities.

He promised to support the “enduring dream of the Cuban people to live in freedom.” He declared that “oppressive regimes cannot endure forever” and upbraided the Iranian regime for masking “a corrupt dictatorship behind the false guise of a democracy” while promising to stand with “the good people of Iran [who] want change.” He took on Iran’s ally, “the criminal regime of Bashar al-Assad” in Syria, whose “use of chemical weapons against his own citizens, even innocent children, shock the conscience of every decent person.”

Trump's message resonated with every person on the planet who desires liberty, and appreciates the American message of freedom through strength.

Then, Trump delivered a decisive blow to all of the socialist elitists around the world, including those in the Democrat Party of his own country, by pointing out how socialism has destroyed Venezuela.  He declared that “the problem in Venezuela is not that socialism has been poorly implemented, but that socialism has been faithfully implemented.” Trump promised to help the Venezuelan people “regain their freedom, recover their country and restore their democracy.”  But, his message was also a warning to all of those seeking socialism, and its destructive policies - a warning that Trump and the liberty loving peoples of America are willing to fight to stop such regimes and atrocities.

Trump was clear, and could not be misquoted.  He proclaimed that he was ready to institute a vigorous defense of freedom if necessary.  It was a message to the enemies of freedom, a bold challenge to those who stand opposed to the liberty America stands for.  President Trump made everyone realize that he believes in the principle of peace through strength - a commitment that has left the liberal left crazies fearful, and in the throes of losing all of their confidence.

-- Political Pistachio Conservative News and Commentary
Posted by Douglas V. Gibbs at 1:46 AM