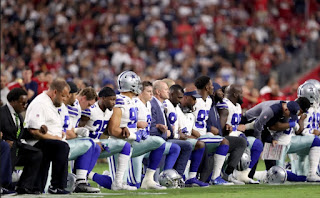 
Monday Night Football finished off a controversial weekend regarding the National Anthem.  Donald Trump hammered on professional football for their continued campaign of kneeling during the National Anthem, and all it did was solidify their resolve and make matters worse.  During Monday Night Football the Dallas Cowboys, owner Jerry Jones as well, made a statement to do their part, they believed, in showing unity.  The left's response to criticisms of the team's decision revealed that they do not understand the whole point of all of this.  The Cowboys took a knee arm in arm before the National Anthem, to show an image of unity and equality, and then stood for the National Anthem.  Scott Van Pelt on ESPN then stupidly commented that he didn't understand why the Cowboys were boo'd, anyways.  He observed that they didn't disrespect the flag.  Does that mean you are just angry?

No, Scott, it means you, and everyone else, still does not understand why the idiots of the NFL who have been playing "Colin Kaepernick" are killing the game of football, why many people are no longer watching the games, and the whole reason those angry with the "call for equality" are ticked off in the first place.

Yes, it is a bothersome thing to see people not respecting the flag during the National Anthem.  But, it goes deeper than that.  It's the motive, and the false information these idiots are acting upon with their silly protests.

My first thought is that they are disrespecting the very system, and the military veterans, that has enabled them to make the protests in the first place.  Do they not see the irony in the fact that they are protesting against what allows them to protest?

First of all, the equality the protesters are calling for is not the right kind of equality.

For clarity regarding what I mean, read this:

Go ahead, check who's behind these leftist groups screaming for equality.  Underneath the covering and behind the curtain are a whole mess-load of communists.

"But, Doug," I can hear someone screaming, "we've got to get rid of the racism in America."

What racism?  The only racism I see is by the minorities falling for the leftist message (I lost count of the false claims in the Communist Party USA's article listed above before I was even a quarter of the way through the article).  The kneeling is saying we have an oppressive nation, therefore it's an oppressive flag, therefore they won't stand for the racist National Anthem.  Therefore, the system of liberty needs to be changed (into a communist model?)

Except, all of that oppressive and racist talk is bull squat.

When it comes to police violence, for example, the idea that white cops are targeting blacks is false.

In reality, a randomly selected black man is overwhelmingly unlikely to be victim of police violence — and though white men experience such violence even less often, the disparity is consistent with the racial gap in violent crime, suggesting that the role of racial bias is small.

Only 0.6 percent of black men experience physical force by the police in any given year, while approximately 0.2 percent of white men do. To be fair, these are probably slight undercounts, because the survey does not allow us to identify people who did not experience physical force during their most recent contact but did experience such force during a previous contact in the same year.
Only 0.08 percent of black men are injured by the police each year, approximately the same rate as for white men. A black man is about 44 times as likely to suffer a traffic-related injury, according to the National Hospital Ambulatory Medical Care Survey. Moreover, keep in mind that these tallies of police violence include violence that is legally justified.
Data from 2015 suggests that black men are three times as likely to commit violent crimes as white men. To the extent that cops are more likely to use force against people who commit violent crimes, which they surely are, this could easily explain any disparities, even though the differences are very slight.

Only 8 percent of black married-couple families live in poverty. Among black families in which both the husband and wife work full time, the poverty rate is under 5 percent. Poverty in black families headed by single women is 37 percent.  Therefore, poverty being higher in the black community is not because of racism as much as it is a self-inflicted problem of single-parent families (which is actually a direct result of the political policy of welfare programs).

And, please, don't play the Michael Bennett card.  He was running like a guilty man when apprehended.  And, there is no evidence of racial profiling like he is screaming happened.

The anger of the people booing is not just about the disrespect for the National Anthem we are seeing, but the fact that the disrespect is based on a false premise and false information.

Are there racist people in the world?  Sure.  Is racism running rampant through the white population in the United States?  No.

If anything, the racism we've been seeing has been by non-whites who are freaking out over oppression that does not exist simply because they are listening to, and believing, a leftist political establishment that has kept them in poverty for decades upon decades.

That makes the protesters pawns, doing as they are fooled into doing, like good little lemmings.

If you want to be angry, be angry with the people who have been promising hope and change, and have given you nothing more than misery and bondage.  Your anger, I say to the protesters claiming America is a racist country, is misdirected, and based on false information.

-- Political Pistachio Conservative News and Commentary
Posted by Douglas V. Gibbs at 4:53 AM